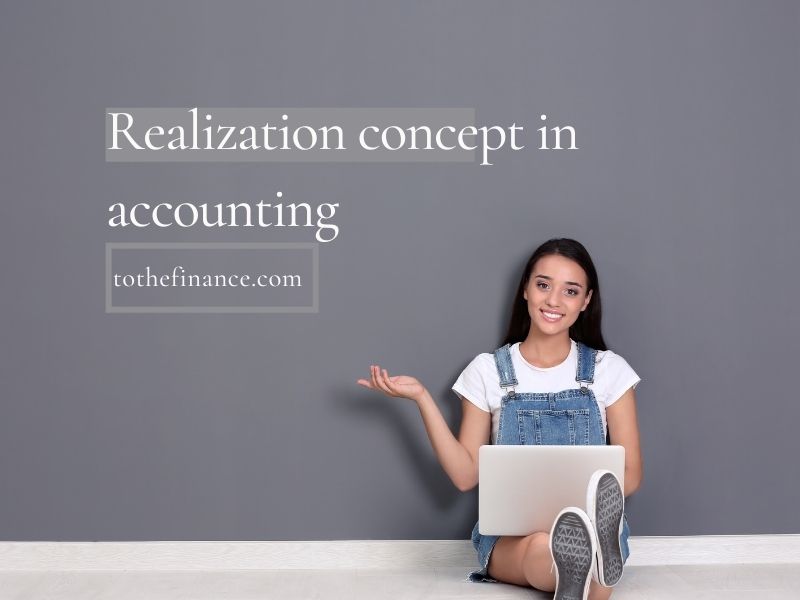 The realization concept or the revenue recognition principle in accounting is a method used by accountants for recording revenue earned by the business.

This principle entails the time when a business should record revenue in the books of accounting records. This concept is applied in determining cut-off for the income, it helps in calculating profit/loss for a period under a specific accounting period.

Imagine yourself as an online clothing brand that has received an order of two dresses. The buyer is given the option of paying through a credit card or cash on delivery. One way or the other, the order will be delivered and the payment will be received. Now definitely you have to record this transaction in your journal and ledger to include in the financial statements.

Thinking like an accountant, you might want to record the revenue from the moment the order has been confirmed, or maybe when the payment is credited, or when the shipment is out, or when the delivery is made. Out of all these approaches, the last one i.e. recording revenue when the goods have been delivered is the right approach for recording the revenue. It’s the point when related risks and rewards of the deal have been transferred to the customers.

This concept of ”transferring risk and reward and recording revenue” is known as the REALIZATION concept.

According to the realisation concept, the revenues should be realized or recorded at the time when the goods or services have been delivered to the purchaser. Here, the transaction is being recorded based on the transfer of goods/services from the seller to the buyer and not based on the transfer of risk and rewards. This realization principle has been the foundation of the accrual basis of accounting which presents a similar concept.

For understanding purposes, the revenue recognition principle is applied in three broad scenarios below.

If the buyer has made the payment for corresponding goods before the delivery is made, then according to the realization concept, the revenue is not going to be recognized until and unless the goods are transferred to the buyer, even though the cash has been received. This is known as the transfer of ‘risk and rewards’ because the risk of damage or loss of goods is eliminated and delivery has been accomplished.

For example, payment of a Toyota car is made in full on 5th March 2022 but the car is delivered on 15th March 2022. The revenue will be recorded on the 15th March.

A second scenario is when the payment for corresponding goods is made after the goods have been delivered. Again, the accountant is not going to wait for receiving cash to recognize revenue. Instead, according to the recognition principle, a receivables account will be created and the revenue is going to be realized the moment it is earned i.e. at the time delivery of goods has been made.

For instance, the business has delivered goods to the customers on March 20th. However, payment is to be received in February. So, the revenue needs to be recorded on 20th March because risk and rewards have been transferred on this date.

For example, a salon business agrees to provide makeup services to a movie production house for 3 years, for $8000. From the salon’s perspective, if this payment is received in advance, then it will be recorded as deferred income during 3 years.

On the other hand, if the payment is made after the completion of the project then it is considered receivable throughout the duration. In either case, only the percentage of services that have been completely delivered is realized as revenue every month or year. For instance, in this example, $222 ($8,000/36) will be recorded for the services rendered each month.

The realization concept is legally compliant with the law of transfer of property. Also, it reduces the risk of doubling revenues. It is a fair method as it is not focused on the collection of money only, rather it is focused on transferring goods/services and then collecting the rightful amount due.

The revenue realisation concept is of the view that revenue should be recorded when related risks and rewards of the transaction are delivered to the customer. This concept is important for complying cut off accounting assumptions.

For the services, revenue is recognized when these services are rendered. If service is rendered in more than one accounting period, the percentage of completion is used in revenue recognition.